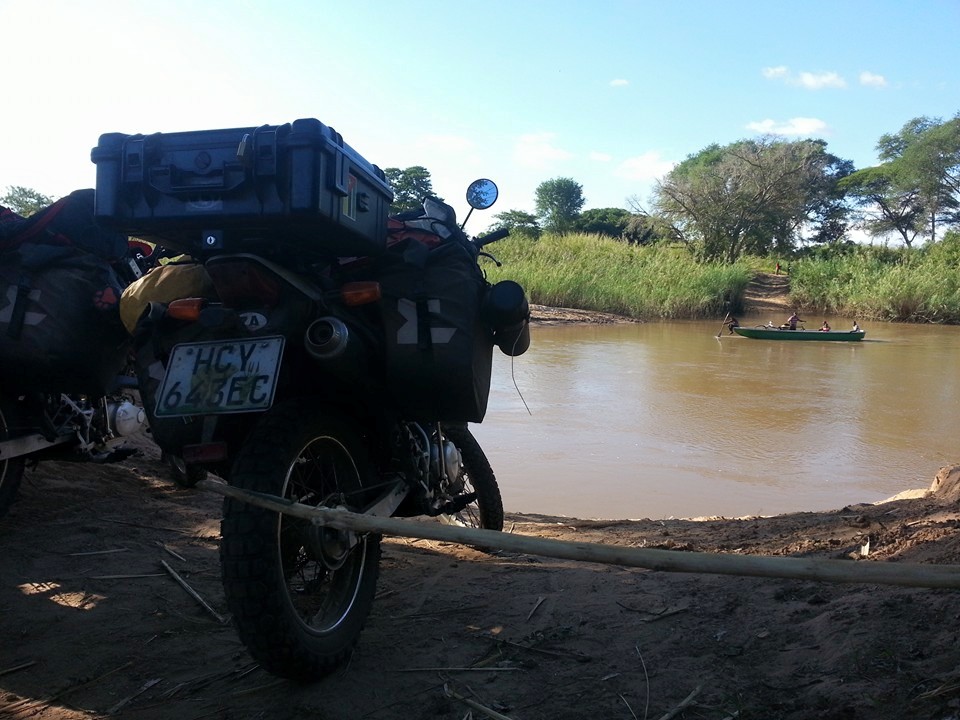 A number of people have been asking for this particular blog article. When you see photographs of motorbikes being loaded into a rowing boat in order to cross rivers, you can almost taste the adventure. Truth is, in the moment you are dreaming of tar roads and a shower. The past 3 weeks have been some of our most difficult riding so far, but also with some fantastic rewards. 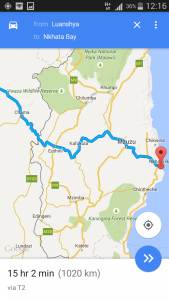 If you ask Google for directions from Luanshya, in Zambia, to Nkhata Bay, in Malawi, it gives you a route about 1000km, which for us is about 3 days. So this is what we planned on. In the end it took us 6 days, but more about that later. We left Luanshya and planned on wild camping the next 2 days on route to Malawi. Our next appointment was in Chipata, Zambia, but our host was in the UK for a week, so we decided to spend a week in Malawi whilst he was away.

Our first day’s travel was uneventful. We travelled about 300km and wild camped somewhere near Mpika. Wild camping can be a little challenging as you don’t have access to a shower and sometimes even cooking food can also be challenging. I think we ate a good meal for lunch and just had a snack for dinner.

Our first day’s travel was uneventful. We travelled about 300km and wild camped somewhere near Mpika. Wild camping can be a little challenging as you don’t have access to a shower and sometimes even cooking food can also be challenging. I think we ate a good meal for lunch and just had a snack for dinner.

The following day we got to Mpika on fumes as we cut it a little fine on petrol. We’ve started carrying a little extra fuel but have only needed to use it once so far. This is when the going started to get difficult. We took the T2 as far as Matumbo and then turned off on a road labeled as the S107. We were warned that there was road works but we should be able to pass through. The road started as a good tar road, wide and fast going. After a while the road became gravel, which is fine, still good progress. After a while there was some road blockades made with dirt but still a path through that the bikes could fit through. With the advice that we’d be able to make it through, we proceeded. After a few detours that took us away from the road and back again the road just seemed to stop. It became clear that the road was still under construction. Not just road works but road construction. As the road ended we set up a tent, as there was no people or traffic around.

We had intended to wild camp one more night before getting to Malawi so this seemed fine. One problem though is that we were a little low on water. We set off the next morning and passed through a small village. We took the opportunity to try and get some water. Out came a cup of water that Anneen and I shared. It occurred to me later that this water had probably been carried from far and hence was a valuable commodity. We carried on down our road that was now twee spoor and getting sandier by the second. It’s fun to travel down such tracks and see the small villages, especially when the sun is still not at it’s hottest and the sand is not too bad. We found our way back to the, under construction, road which was now a sand pit. I guess this stage of road construction had gotten as far as clearing trees but no surface and been laid. My understanding is that roads have layers, or at least my engineering geologist wife and contractor brother in law tell me.

We tried to ride down the sand pit for a couple of kays until a couple of boys, who I guess were employed by the contractor as watchmen, chassed us away and pointed us back to the twee spoor. They also warned us of a river crossing, which I decided to keep from Anneen as she was getting quite disheartened (read gatvol) with the riding. The twee spoor turned to thick sand as the sun got high. This made the sand extra 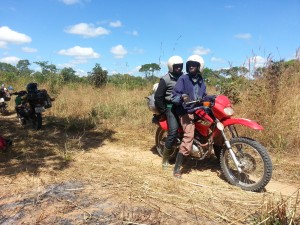 loose and made sure we were working up a sweat. Again we stopped in a village for a cup of water. This time we were offered a watermelon as well, but we declined as we had nowhere to put it. We should have just asked for a slice. We also saw another red XR125 coming the other way, the only traffic so far that day. A long lost cousin of my bike, obviously ridden by locals. I’m pretty sure we were the only mazungus (whites) for miles. They assured as it wasn’t far to the road again but it was quite sandy. Turns out all things are relative. We spent the next 4 hours riding thick sand. Our twee spoor also became een spoor. Also navigation became harder as when the path forked there was no way to differentiate which was the main path. As we progressed we checked with locals that we were still going the right way. The feedback was always optimistic and varied time estimates. We decided later that most these people walk so probably just assumed motorbike was 5 times faster.

Eventually we made it to the river crossing. This was too deep to ride but the locals had a rowing boat that seemed like the locals regularly use for motorbikes. We let them load the first of the 2 bikes while I negotiated a price. Crossing was actually not so hairy. Loading and unloading was a little scary. The one side had a steep bank and the other the boat couldn’t get closer than 2 meters from the bank as it was shallow. All made much easier when you have 20 helpers though. 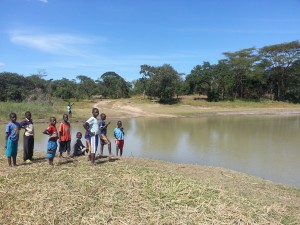 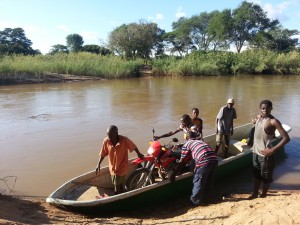 On the other side we packed the bikes again and had a sense of having made some progress, set off again. We were sure we were almost at the road. Directions were once again a problem but eventually we found our way to a wider path. The villages also got a lot bigger, which encouraged us that we were getting closer to civilization. The sun was getting a little lower and the roads a little wider. The villages looked beautiful soaked in orange light. It would have been awesome to stay but we were on a mission to make it before the sun went down. Eventually we were back on a gravel road and my bike saw 70kph again. We rolled into town just after dark and found a victory coke, which tasted so good. Even Anneen took part, who normally hates coke. Within minutes accommodation had found us and we were asleep dreaming about sand and rowing boats.

We were supposed to be in Malawi already but were just happy to be somewhere again. The next day we headed for the border. As we got closer we found a car with a Malawi number plate. They pointed us in the right direction but warned, as it was uncontrolled. We carried on and again found ourselves on sandy goat tracks. Wondering whether we were lost or busy crossing the border illegally we found a bike going the 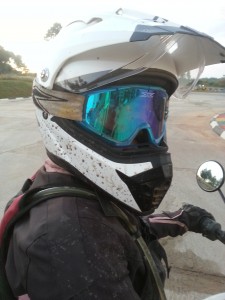 opposite way. He gave us the full story. We were supposed to find the immigration office back in Chama and get stamped out of Zambia. After crossing the sandy tracks we were supposed to ride the 200km to Mzuzu and get stamped into Malawi. Ever conscious of doing things properly, for fear of loosing our carnet deposits we turned back to find immigration in Chama. After asking around we found the makeshift office in a hospital that was still under construction (as a side note, there is lots of construction happening in Zambia). Problem is that there was no customs office. This was a problem for our carnets. We were advised to get an affidavit from the police, but it being after 3pm meant the person we needed to stamp the affidavit had gone home already. Slightly defeated we went back to our accommodation from the previous night and resolved to set off early.

The next day we got the stamp we needed and found our way back to the sand tracks. We were supposed to arrive at a police checkpoint but the maze of tracks meant we missed it somehow. After a little riding we had a familiar problem, a river. The first was shallow enough to ride but not the second. Luckily there was once again a rowing boat. This time the locals seemed a bit more bemused. Obviously bikes don’t cross there often. 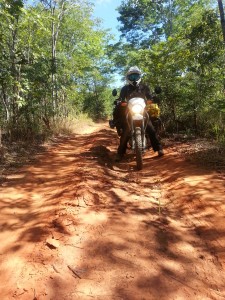 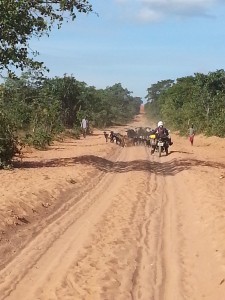 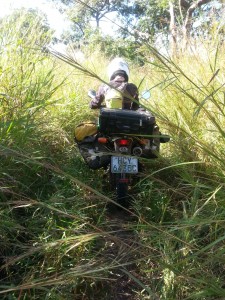 After crossing we had to seek out petrol. In the nearest town we found informal jerry cans, MK1000 (R22) per liter. We were advised that the going rate in towns was MK800 but seemed skeptical. We got just enough fuel to get us to Mzuzu. The rest of the 200km was not as bad as the “road” in Zambia but still took as all day. We eventually found the first bit of tar we had seen in days, as the sun was setting. We had made it to Mzuzu, admittedly after the immigration office had closed. Tomorrow’s problem…

From here I’m just going to summarize. We spent a few days on the lake in Nkhata bay relaxing and taking 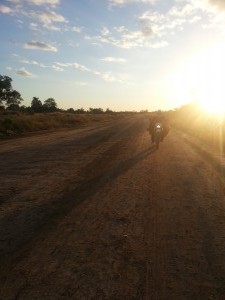 photos. After that we went to a remote lodge in Usisya. Pretty bad roads, loose rocks and steep, but were rewarded by a very nice place. No vendors to bother you and very quiet. From there we hiked to a village called Ruarwe and met some Brits who are working as doctors there (we actually bumped into them again in Mozambique, as I write this). Ruarwe is very remote and only reachable by foot or boat. There is a lodge there called Zulunkhuni, which is beautiful. Fantastic snorkeling! After which we headed south for Chipata in Zambia. I’ve got a great video to share with you from our time in Chipata, but let me leave you with a video montage from Malawi!